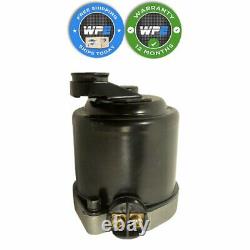 Mitsubishi Montero ABS Anti-lock Pump Master Cylinder Booster Electric Motor. Fits: All Full Size Montero And Pajero Models. Years: 2001 2002 2003 2004 2005. The Full size Montero (Pajero) ABS unit or commonly refereed to as the Brake Master Unit Has an inherent Failure directly related to this electric motor. Until now only Re-builders had access to this part but now it is available to the general public to repair the defective unit in a cost effective way.

The electric motor is activated to pump and pressurize the braking system allowing you to stop with minimal effort. Anti-lock braking system (ABS) is an automobile safety system that allows the wheels on a motor vehicle to maintain tractive contact (TRACTION) with the road surface according to driver inputs while braking , preventing the wheels from locking up (ceasing rotation) and avoiding uncontrolled skidding. It is an automated system that uses the principles of threshold braking and cadence braking which were practiced by skillful drivers with previous generation braking systems. It does this at a much faster rate and with better control than a driver could manage. ABS generally offers improved vehicle control and decreases stopping distances on dry and slippery surfaces; however, on loose gravel or snow-covered surfaces, ABS can significantly increase braking distance , although still improving vehicle control.

Since initial widespread use in production cars, anti-lock braking systems have been improved considerably. Recent versions not only prevent wheel lock under braking, but also electronically control the front-to-rear brake bias.

This function, depending on its specific capabilities and implementation, is known as electronic brakeforce distribution (EBD), traction control system , emergency brake assist , or electronic stability control (ESC). HOW DO I KNOW IF MINE IS BAD? There are 2 typical symptoms , most common is that the motor goes in to short and pumps without stop creating a horrendous screeching noise and the second less common symptom is that the brake pedal becomes stiff due to the electric motor simply ceasing to function. In most cases and with the right tools this part can be changed out in 2-3 hours and is recommended to be done by a certified mechanic! All other destinations are subject to a surcharge.

This item is in the category "eBay Motors\Parts & Accessories\Car & Truck Parts\Brakes & Brake Parts\ABS System Parts". The seller is "wholesalepartsexpress02" and is located in Fort Lauderdale, Florida. This item can be shipped worldwide.